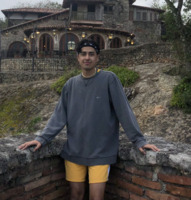 It is so rare that so many people can relate to what you're feeling. I feel so alone but so does everyone.

Did you change your spring break plans because of the virus? From what to what?
I was abroad in the Dominican Republic, we had to cut the trip short to return to the United States.

How did you feel when you were informed the remainder of the semester would be held online?
I was devastated. A huge part of college is the social aspect - being on campus and around my friends. With the school closing I had to return to the UK and also subsequently was unable to continue my jobs as a Floor Governor and at Campus Safety.

Where are you living for the rest of the semester? How did you feel about leaving campus? Or what's it like remaining on campus?
I am currently at home in the UK at my Dad's house. I was very upset to leave campus but I am glad to be at home with my family.

What has been your experience with moving classes online? What's good? What's not so good?
I am finding it so hard to concentrate but my professor's have reworked the classes well and are very understanding. It's a strange time for us all.

How has the virus (and the precautions taken to prevent it spreading) impacted your daily life?
Being in a major city like London, the virus has impacted us like crazy. It's very hard to go out. Currently the UK is officially on lockdown, so across the country schools and non-essential businesses have shut down. The police now have the ability to fine people who are outside unnecessarily. It's like a movie. We're allowed out once a day for exercise and you're allowed to shop but people are not allowed to be in groups bigger than 2 (unless you're family who live together) and 2m of distance is being enforced between everyone else.

How worried are you about getting the virus?
I am not too worried personally, I'm pretty sure I've had it. I didn't want to spread it to people whoa re vulnerable though so I self-isolated in one room alone for two weeks. It was hard.

Do you know anyone who has gotten COVID-19?
Some of my grandma's friends have unfortunately passed away from the virus.

Are you staying in? What are you doing to pass the time?
I spend most of my time playing Animal Crossing on my Nintendo Switch! I just bought it as everyone has been raving about it online - it's perfect for quarantine! I have also been working on music that I want to release (I'm a singer and producer). I have also been FaceTiming my friends here in the UK and back in the US and playing games online with them! I also recorded a video singing "Lean On Me", which members of my old high school choir also did. It was edited together by our old high school music teacher for the NHS and other key workers and has been shown on TV!

Are you going out? Where do you go and what is it like?
I have been out to the shops twice, it's quite desolate in some places but supermarkets still have people in them. Everyone is keeping their distance.

What is giving you hope and/or strength right now?
I am supposed to be studying abroad in Australia in fall. I am really looking forward to it... I hope it can still happen. My music is also giving me strength.

Is there anything else you'd like to tell us about what you're feeling or experiencing right now?
It's strange. Sometimes when I think about it too much I want to cry, as weird as that sounds. I've been through some trauma in my lifetime, as many of us have, but it is so rare that so many people can relate to what you're feeling. I feel so alone but so does everyone. Isn't that strange?